In the terms of classical physics, how should I imagine the linear operator L in <f |L| i>? from QuantumPhysics

Source: The Quantum Cheshire Cat: Can neutrons be located at a different place than their own spin?

Source: (416) Adam Lantos’s answer to What are the three best reasons that support string theory? How do we know that this is a valid area of research? – Quora

Source: (416) Adam Lantos’s answer to What are the three best reasons that support string theory? How do we know that this is a valid area of research? – Quora

Source: (416) David Kahana’s answer to Can the Dirac Equation be simplified into the Schrodinger Equation in the non-relativistic case? – Quora

In conventional spacetime diagrams (where inertial worldlines and lightlines are all represented by straight lines) the worldlines of accelerated observers must be bent (and so cannot be used as cartesian coordinate axes). If the acceleration of an observer is small enough and brief enough for velocity changes to be small relative to the speed of light, then the experience of that observer can be usefully approximated by treating it as inertial. (But how small the velocity changes must be kept depends on how accurately we are able to measure things, and the limiting factor is that the accelerations must be small and brief enough that relativistic effects are smaller than the experimental errors.)

In the case of a traveler passing an inertial observer at high speed and then decelerating and returning (as pictured in the diagram from your comment), 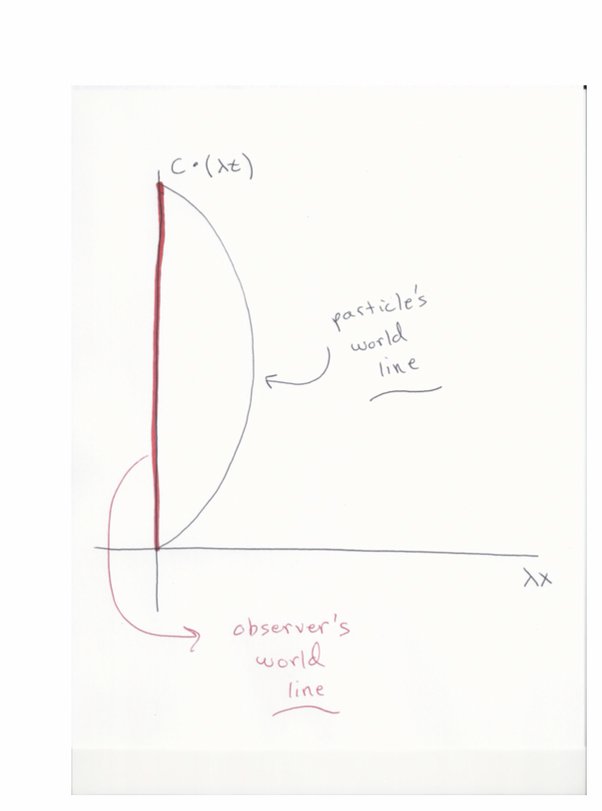 the world lines of the traveler and the inertial observer cannot both be represented by straight lines from the first meeting to the second since they intersect at two points and are not the same. In this example the velocity change is fixed and substantial, so even if the acceleration is very small then the time has to be very long and relativistic effects of acceleration may accumulate to noticeable amounts even if they are not noticeable over smaller time scales.

So, since a conventional spacetime diagram requires all inertial world lines to be straight we cannot draw such a diagram for the whole story in which the traveller’s world line is the t-axis.

We can however draw such diagrams for short time intervals in which the traveller’s velocity does not change too much.

And by piecing together such diagrams we can get a picture of what the story looks like in terms of the traveler’s coordinates.

(I might call this a “spacetime diagram” from the point of view of the traveler but since it results in a bent world line for the inertial observer it is NOT a spacetime diagram in the conventional sense.)

But note that the resulting picture is NOT a “mirror image” of the diagram drawn in terms of the inertial observer’s coordinates!

Now let’s see in more detail how the above diagram comes about.

For concreteness we might consider the case of a traveller which passes by the Earth at a speed of [math]0.866c=0.866ly/y[/math] (which gives a gamma factor of 2) and appears to an Earth-based observer to be subject to a constant acceleration back towards the Earth of [math]1g=9.8m/s^2=1.03ly/y^2[/math]. This brings the traveller back to pass by the Earth again (at the same speed in the opposite direction) after about  2(0.866)/1.03=1.64 years (ie about 20 months) have passed on Earth. Of course, this scenario of constant acceleration relative to the Earth would, if extended in time, lead to impossible situation of exceeding light speed. So although it might be possible to maintain such a constant Earth-relative acceleration for the duration of the trip it would be more realistic to consider the case of constant acceleration as perceived by the traveler. We’ll look at both cases case for now (and probably just go with whichever turns out to be easier to analyse).

In order to plot the two diagrams above, we’ll consider the situation as seen at several times according to the clock of the observer whose coordinates are being used.

For the Earth-based observer’s view of the situation with constant Earth-based acceleration this is easy as the path of the traveler is defined in terms of Earth-based coordinates. At time t years on the Earth clock the traveler is at a distance, in light years, of [math]x=0.866t-1/2(1.03)t^2[/math] – which gives the usual simple parabolic plot.

But to figure out how the Earth’s position [math]x'[/math] in traveller-coordinates depends on the traveller’s time [math]t'[/math] is a more interesting exercise.

On the other hand, if we are given the acceleration as felt by the spaceship then we can analyse the spaceship’s view as follows:

Source: (95) Alan Cooper’s answer to Can you draw a spacetime diagram from the POV of the travelling twin in the twin paradox with very slow turnaround (VSTTP paradox)? The travelling twin is approximately in an inertial frame. See the comment at the question for details. – Quora